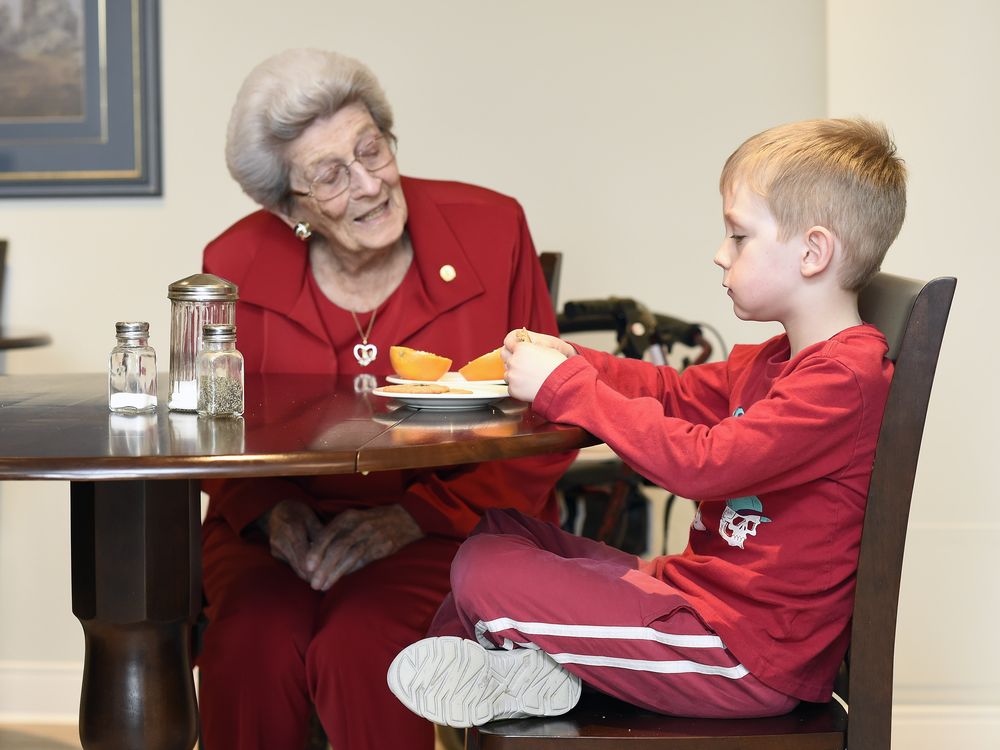 When Jared and Abby Wolfe first told their friends and family they were moving everyone was confused. Why would two young university students want to live in a place with a bunch of seniors?

“It really struck me that (Orange Tree Village was) building a great sense of community and that it was going to be a very interesting and engaging experience to be here,” Abby said.

Orange Tree Village is an intergenerational community where university students, like Abby and Jared, live among seniors and children attending daycare — a first of its kind in Regina.

“We’re trying to really create that fun, young, vibrant community feel so that people don’t feel like they need to be a certain age to live here,” said Kelly Tunison, ambassador of intergenerational living at Orange Tree Living, which operates the complex.

Orange Tree Village is located in Harbour Landing and opened at the start of December and still has suites available. Residents are just starting to get acquainted with their new homes.

Wheeler was the first resident to move in. She says she is enjoying the brand new building but is still getting used to all of her neighbours — including the younger ones.

The early learning centre is expected to be fully open in early April and will have approximately 90 licensed spots plus a before and after school program. Until then it is operating out of some vacant apartment suites.

Kids like six-year-old Colton Ahlquist get to come and enjoy traditional daycare activities with a twist — senior residents will sometimes join in on the fun.

When someone new moves into the building the early learning centre kids will make welcome cards. Recently Ahlquist enjoyed making a card with a big building on it for a new resident.

The personal care home has three different houses with one specifically designed to care for people who have dementia or Alzheimer’s.

“This is a community where everybody can come and live and have it not feel institutional,” Tunison said.

“Its not a typical retirement community. It really is intergenerational in that if somebody with a cognitive disability, for example, maybe just can’t live a hundred per cent independently needs some supports, they can come here,” Tunison said.

Orange Tree Village also includes university student suites. University students can apply to live there with reduced rent, with the stipulation that they have to do 30 hours of work a month in the building.

The facility also isn’t just for its residents. People from Harbour Landing have access to the building, with free yoga and cooking classes offered weekly. There is also a hair salon open to the general public as well as a restaurant and a coffee shop in the process of being built.